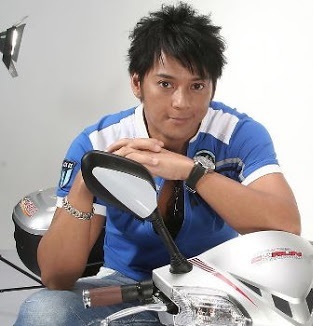 Don't Mok him if you know what's good for you.
Advertisement:

Max Mok Siu-chung (莫少聰, born 2 December 1960 in Hong Kong) is a Hong Kong actor, singer, and film icon with a career that started off since the 80s.

As a teen, Max Mok always wanted to pursue a career in law enforcement, intending to become a police officer when he grew up. But despite graduating police academy with flying colours, his choice of career was greatly opposed by his father, who insists on Max being a clerk and office worker. Working a relatively boring life as a salaryman, Max, by chance, managed to enroll himself in a part of April 1980's Hong Kong Talent Search, landing him his film debut in July of the same year.

Starting off as extras in various movies, Max would eventually get to star alongside some of Hong Kong's biggest names - notably, as the onscreen youngest brother of Andy Lau and Alan Tam in The Dragon Family.

His career finally had a breakthrough in the 1990 film Lung Fung Restaurant (alongside Stephen Chow). Max made a name for himself when performing a deadly stunt in the film (one which involves jumping off the fourth floor of a building), badly injuring his arm in the process and proving himself to be a dedicated player in action cinema. Further roles in Lai Shi, China's Last Eunuch and Once Upon A Time in China 2 would bag him a nomination in Hong Kong's 24th and 29th Golden Horse Awards for Best Acting Performance.

By the 2000s, Max's onscreen performances has somewhat diminished from cinematic roles to TV performances or music videos.

Max is a dedicated Buddhist who is very active in promoting Tibetan Culture and Tourism.

Tropes Associated with this actor: