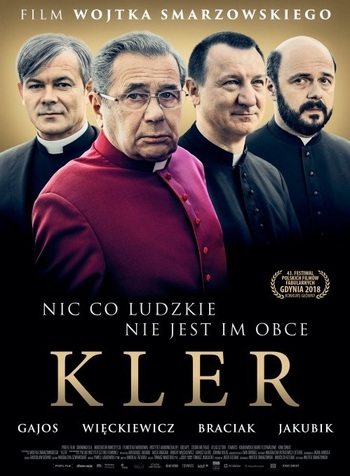 Nothing human is alien to them
Advertisement:

Clergy (Kler) is a 2018 Polish film that tells the story of three Catholic priests. Afew years ago, a tragic fire bound their fates together. Now each year on the anniversary of the accident they've miraculously made through, they meet together to celebrate their survival. Each of them lives completely different life. Lisowski works for the Curia in a big city and rises up in the ranks, dreaming about job in Vatican. Unfortunately, he's too important and valuable for archbishop Mordowicz, a pompous and power-hungry dignitary, who uses Lisowski as his right-hand man. Trybus, in contrast to Lisowski, is a village parson. Working in a poverty-struck place, he's succumbing to all sorts of temptations, while barely getting by. And the third of them, Kukuła, despite his fervent faith and countless good initiatives, loses the trust of his parishioners overnight due to an unrelated scandal. As the plot unfolds, the fates of all three start to tangle even more, as they have to face or get hit by offshots of the growing problem in the Curia...

The film was intended as a hard-hitting drama, presenting the inner workings of the Catholic Church in Poland, focusing on all the uncomfortable, difficult, and often deliberately hidden subjects, along with the general handling of the entire institution. Probably a bit too hard-hitting, since even before the premiere, the Church hierarchy started to do its very best to if not suppress the release, then at least take people away from it... only to achieve the direct opposite effect.

Creating a nationwide sensation, with entire cinemas full and breaking few box office records, the film further gained in value soon after, when real-life scandal, mirroring the fictional plot of the film, surfaced.