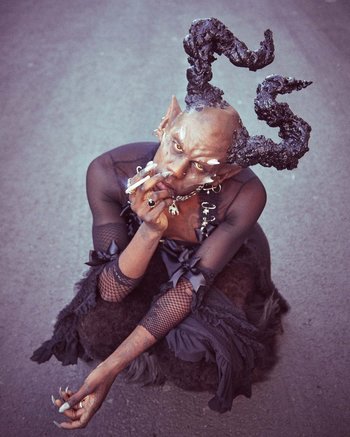 Yves, at their most refined.
Sister mother, brother father
Have you, have you looked outside?
I'm scared for my life
They don't trust us
— "Noid"
Advertisement:

Yves Tumor is a Afro-American experimental electronic, ambient, psychedelic, alternative R&B, soul, whatever they feel like singer, songwriter, multi-instrumentalist and record producer. Born in Miami, Florida Sean Lee Bowie (or at least that's what they have told us their real name is) would be raised in Knoxville, Tennessee. Where they would teach themself to play several musical instruments as a teenager. Starting with bass at age 17, they would later move on to the guitar and keyboard and after learning how to play songs by artists such as Nirvana and Jimi Hendrix, they began making electronic music that had elements of noise, vaporware and sound collage, which directly correlated to them recording under disparate monikers such as Teams, Rajel Ali, Bekelé Berhanu and Shanti throughout the 2010s.

Their work under these monikers (Teams, in particular) led to praise in electronic circles and various blogs, as they began to collaborate with other experimental electronic musicians such as James Ferraro, and Mykki Blanco. Yves would eventually debut under the Yves Tumor moniker with appearances on label projects such as NON Worldwide Compilation, Vol. 1 and Mykki Blanco Presents C-ORE. Both being preamble to the release of their debut album When Man Fails You in 2015. The following year would also see the release of his sophomore record Serpent Music, a record that would showcase hints of their future psychedelic soul-inflected electronic sound.

Tumor had another productive year in 2017. As they would contribute the ambient electronic track "Limerence" to the Pan label's 2017 compilation Mono No Aware and self-release their otherworldly third record Experiencing the Deposit of Faith online, before signing to the Warp record label. Tumor would release their fourth album and debut record for Warp, Safe in the Hands of Love, in 2018. Where it would receive massive acclaim due to its eclecticism and experimentation with sounds coming from disparate genres such as neo-psychedelia and post-industrial. 2020 would see the release of Heaven to a Tortured Mind, where they would further subsume themself in the psychedelic rock and Motown soul sounds they had toyed with on previous records.