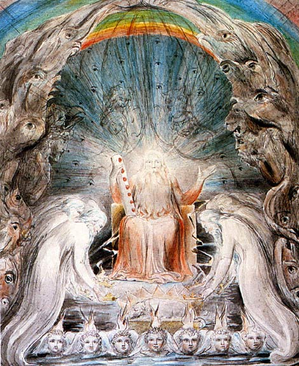 "In the beginning God created the heavens and the earth." — Genesis 1:1
Advertisement:

The Big Boss of the universe in monotheistic and monolatric religions. The Alpha and the Omega, the Big Cheese, the Big Guy in the Sky, the Man Upstairs, the Almighty, the Creator, Capital G, Ceiling Cat, Old Beardy.

If all of existence is one big story, He's THE Big Good, God of Good, and just generally good. He's also often the creator of the universe/s and everything in it/them.

Metaphysical human concept or not, He's got a pretty large chunk of humanity as believers and followers, thanks in part to best-selling books such as The Bible and The Qur'an, which feature God as a prevalent character, if not the main character, books stated to have been inspired by Him.

In nearly all cases, God is shown as being all-powerful, and usually all-knowing. Since God is believed by followers to be the driving force behind the entire universe, this also makes a good deal of sense. Also common is a portrayal of God as the ultimate Chessmaster, capable of executing an eternity spanning plan that often works In Mysterious Ways. This leads people to wonder why God doesn't just solve the problem of evil with a single metaphysical finger snap — but that's a discussion best left to theologians. He is even shown to be everywhere at once.

Since depicting God is attempting to portray an infinite divine being in human terms and ideas, this is problematic at best, and many series choose to go with Have You Seen My God?, Pieces of God, or just asking the audience to Take Our Word for It. Rather than giving God an explicitly defined human shape and face, most portrayals tend depict him as a wise elder (often in homage to the Sistine Chapel), one or two giant hands in the sky (in line with Heaven Above), an eye, or even nothing more than an ALL CAPS WORD BUBBLE.

Perhaps the most common portrayal of God (at least in the West) is as a God in Human Form, specifically God in the form of Yeshua the Nazarene. These portrayals tend to follow The Four Gospels pretty closely and often narrow in on his time as an infant or on his execution.

God is also not always seen as the benevolent ruler of everything, hence why tropes such as God Is Evil exist. Some of this is Alternative Character Interpretation from The Bible and similar works, others are authors liking to play with audience expectations, and some of it is authors who dislike God and religion putting a little personal touch on their creation/their creation was made to express those views. Works which feature Rage Against the Heavens often feature God being a jerk, if not outright malevolent to his creation, though some would say he's more concerned with perfect justice than just being nice, which can cause problems with an imperfect humanity. Taking this depiction to its furthest extent creates a variation on the Cosmic Horror Story.

He's usually portrayed as the only deity in the works He appears in, with two major trends going against this. Some depictions create an opposing force to God equal in stature to Him, The Anti-God. In another variation, for when there are other gods in the setting, He still gets top billing. Both of these are actually in contrast to at least Abrahamic religious canon, but that hasn't stopped fiction.

Medieval and Renaissance Art is almost exclusively concerned with depicting God or those faithful to him. Most commonly, He's conflated with the infant Jesus being cradled by his mother, the suffering Jesus on the cross, or the corpse of Jesus being mourned by his mother. Regardless of whether these incarnations deal with God incarnate, they almost always feature him with some variant of the Holy Halo, often even a Holy Backlight, to communicate his wisdom and divinity.

Using God as a character rather than simply referring to the Powers That Be or using terms without religious connotations is a dicey proposition in a multi-faith society, as it is just about the only thing you can do, other than a Series Finale Clip Show, that is 100% guaranteed to alienate a chunk of the viewers.

TV shows in which God plays a major role tend not to last very long, regardless of their various good points. The main reason for this is any characterized portrayal of God is most likely going to follow the rules of a given religion's version of God (mostly Christianity in the West), which often alienates people who aren't members of that religion. This, along with the increasing secularization of society in the 21st century, means that the media often sidesteps portraying God in a particular way for various reasons, as those who run and work in the media are people with their own various beliefs and attitudes towards God. In a practical sense, having an all-powerful, all-knowing, all-good character also risks killing the tension if handled poorly, since at any point, said character could step in and resolve any conflict the heroes might have.

There's a whole host of tropes that go alongside classical appearances of God. Expect him to reward the faithful dead in the glorious paradise of Heaven, where he's praised by Winged Humanoids or rotating wheels depending on whether Our Angels Are Different or not. The Archangel Michael will serve him faithfully against those who are justly condemned to Hell, especially the leader of the Fallen Angels, Satan. Of course, secularized works tend to play with these standard portrayals, often with caricatured versions of Fluffy Cloud Heaven and Fire and Brimstone Hell.

Parodies are common (see King of All Cosmos), but limited to Black Comedy — once you've turned God into a joke, it's hard to do anything else.

The danger of being burned at the stake leads to many writers choosing to thinly veil God as a Crystal Dragon Jesus or "the Light". Said God may even refuse the label for personal reasons.

The Maker is often a stand-in for God, if it isn't outright Him.

For a full rundown of the way God or Gods are portrayed, see Our Gods Are Different. For tropes about them, see God Tropes. In addition if you want to see different kind of Moral Systems about God/Gods see Religion Tropes, which Morality is based on them. Related/Connected to Tropes of the Divine.

On an unrelated note, had you been the person to create this page in the first place, you may well have seen the prompt: "Describe God here". Quite the task indeed, whatever your spiritual viewpoint.

And then God said, "Let there be examples." And so it was done; God had created many examples of Him appearing in other works:

AND ABOVE ALL... DON'T MAKE ME COME DOWN THERE.