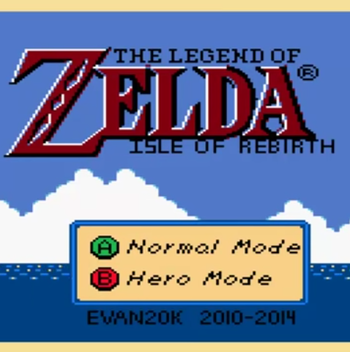 Isle of Rebirth is a Zelda Classic quest made by Evan20000. Zelda is kidnapped by a dragon and taken to the isle of Remdra, which is ruled by a clan of Wizzrobes. Link heads to the isle to rescue her, but, upon his arrival, loses the Triforce of Courage without any apparent explanation. At first, this appears to be part of yet another plot to revive Ganon, but Link soon uncovers something far more sinister...

The quest is known for its difficulty, including a Bonus Boss widely recognized in its time as the most brutal ever made in Zelda Classic. To compensate for this, it lets you choose between two difficulty levels at the start, and allows you to reduce the difficulty further with repeated deaths. Download it here