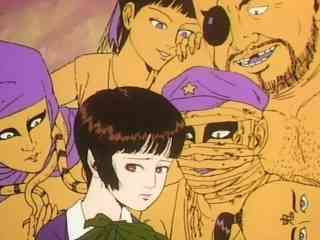 Midori, a little girl from a run-down family, sells paper flowers in the streets. She wishes to earn enough money, so she can join her classmates in the school picnic. Late one night, she returns home to find her ailing mother dead — what's more, rats are gnawing at her private parts. With no one to turn to, she tries the address one customer gave her — and comes to a seedy freak show run by a money-hungry Mr. Arashi. Midori is degraded, brutalized, and forced to perform fetishistic acts on stage, until a midget illusionist named Wonder Masamitsu comes along and takes Midori under his wings. Will Midori at last find true love and happiness? ... Nope, not in this kind of story.

Based on the iconic 1930s kamishibai story of the same name, Shōjo Tsubaki (少女椿), also known as Mr. Arashi's Amazing Freak Show, is Suehiro Maruo's most famous manga. First published in 1984, it is the work that has cemented his reputation in the west. A crude but very faithful animated adaptation was released in 1992, made over the course of five years through the efforts of one single person: Hiroshi Harada. The film was a heavy subject of censorship in Japan as a result of its graphic content and explicit depictions of child molestation and animal abuse, to the point where the master reels were outright confiscated by the Japanese government. They were eventually recovered in 2013, and a new print and digital transfer was made for new screenings, with a Blu-ray release of this transfer being planned for 2020. A second film adaption of the story was released in 2016, combining live-action footage with the grotesque and surreal designs of the original manga and cartoon.