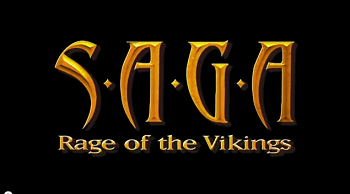 If only we could show you the awesome music as well…

Saga: Rage of Vikings was a 1999 Real-Time Strategy released by Cryo Interactive. It's set on a High Fantasy world during the time of the vikings. You can play as Humans, Dwarfs, Elves, Ogres, Giants or Centaurs, sometimes with more than one race at the time.

What makes Saga different from most games is that is somehow more realistic, fighting against many traditions of RTS. When you collect a resource, you should have somewhere to store it; when you want to get food, you must harvest it; when you build a place, you should move the resources to that place before starting the construction and (perhaps the most particular fact about this game) in order to gain new troops you must make your troops reproduce… that's right, you NEED to make your troops reproduce. One male and one female in order to obtain a new troop. Aside from some restrictions, note  giants only reproduce with female giants and centaurs can only mate with centaurs, all races can make new troops with each others, meaning that you can have a mixed civilization.

Not to be confused with the SaGa series of RPGs by Square Enix.