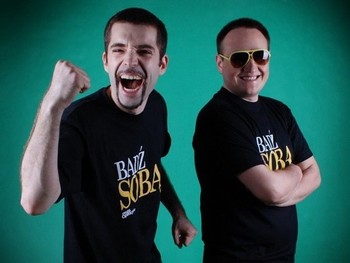 Mieszko and Ziemowit, with Be Yourself on their shirts.
Advertisement:

Grupa Operacyjna is a Polish music group that started as a four-person group in 1996 but really took off in 2005. It had Mieszko Sybilski, originally known as Fox, as the main rapper and Ziemowit Brodzikowski as the main producer and occasional role. They specialise in hip-hop and rap with a comedic edge, often making jokes involving other Polish celebrities or the harsh reality of life. In November 2012 Mieszko announced that he is suspending the band's activity, as he lacked the material to keep making songs and didn't want to force them.

, though most of it was removed for some reason (it was after this article was published, but TV Tropes is likely not responsible). You can still find their songs and music videos elsewhere.

This band's music and their music videos provide examples of: