The characters from comedic RPG title made by Zeboyd Games, Cthulhu Saves the World. 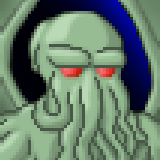 One of the Great Old Ones who had a curse put upon him by a mysterious stranger. This curse drained him of his power, and the only way for him to break it is for him to become a true hero. 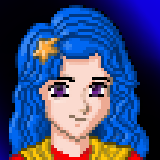 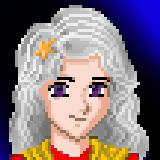 A woman of the sea who joins Cthulhu after he saves her from monsters. 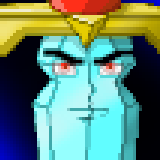 A sentient sword with a strong sense of heroism who joins Cthulhu & co. after they defeat him and he learns that they are heroes. 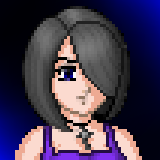 A Goth girl who joins Cthulhu & co. in Dunwitch, after she laments that she can't use necromancy to control Nyarlathotep's zombies. 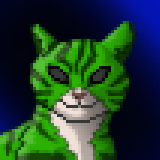 A green cat-like alien, known as an Ultharian, who joins Cthulhu & co. after beaming them aboard the spaceship. 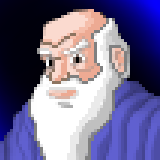 A comically senile old priest who joins Cthulhu & co. in the Water Shrine. 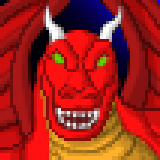 A red demon dragon who was terrorizing Alhazred until Cthulhu defeats him, and joins Cthulhu & co. afterwards.

The Three Heroes of Goodly Justice

The Three Heroes of Goodly Justice (Elonalina, Dash the Daring, and Switchblade)

From left to right: Elonalina, Dash the Daring, and Switchblade

The trio of generic RPG heroes who appear as the first obstacle on Cthulhu's way. Elonalina is the Cleric, Dash the Daring is the Hero, and Switchblade is the Thief. In Cthulhu's Angels campaign, Elonalina (under the nickname Elona, as her name is too big to fit in the character space) becomes the second party member of October's team, while the remaining two turn against her for her "betrayal". 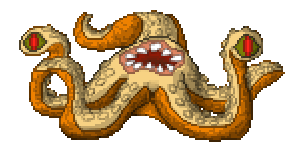 A monstrous massive Mawfish that attacks Cthulhu and Umi while they cross the bridge. 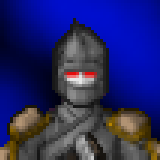 A ninja spirit that attempts to kill Shane the dog for desecrating Ninja Burial Ground by bone-digging. Since Cthulhu is a hero now, he should not allow it and fights the ghost. 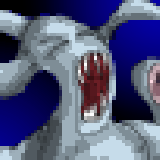 One of the Outer Gods and Cthulhu's old rival, Nyarlathotep terrorizes the city of Dunwitch by overrunning it with zombies he revives and controls. 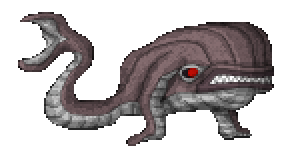 The land-dwelling flame-powered whale that serves as the guardian of the Swamp of Despair. He immediately appears after collecting the Flame Tome from the treasure chest. 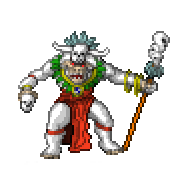 The white ape princess that lives in Ghost Forest, attacking anyone who comes into her domain. 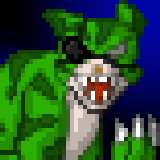 Paws' evil one-eyed twin that is responsible for Alien Invasion in Providence. 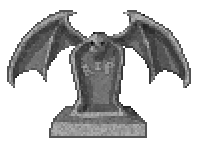 The sentient tombstone that serves as the guardian of the Graveyard of Memories. It immediately appears after collecting the Shotclaw from the treasure chest. 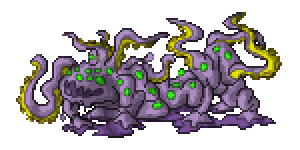 A poisonous creature that was hiding in the pool of magical healing water. Once Cthulhu and his group come to retrieve healing water to cure people of the Kingsport, it immediately crawls out of the pool and attacks the group. 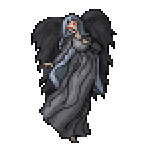 A fallen angel that serves as the guardian of the Ice Cave. She immediately appears after collecting the Giant Whip from the treasure chest.

A black hole that serves as the guardian of the Astral Cave. It immediately appears after collecting the Master Hilt from the treasure chest. 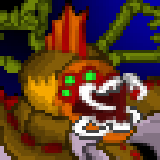 Formerly Cthulhu's minion, Dagon betrayed Cthulhu and took away his followers in the Innsmouth and tried to kill him, believing him to be unworthy of them and seeing him as lapdog to humans. He dwells in the lowest floors of the Marsh Foundry.

A golem made in Cthulhu's likeness, Golthulhu sits on the top of R'lyeh, intending to finish Cthulhu's intended mission and take over the world. 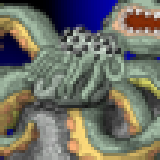 The final boss of the game, Azathoth is the massive Eldritch Abomination added to the story by narrator to serve as the last opponent to Cthulhu.

Originally just an ordinary bridge, it was brought to life by narrator after October and Elona noticed the absence of an enemy that would have attacked them. 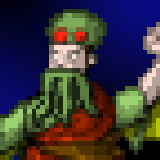 Crazy Cthulhu cosplayer who introduces himself as grand cultmaster Zarbakovaz. After October's group tells him about Cthulhu's change of ways, he accuses them of leading his lord away from his path and tries to kill them to "break their curse". 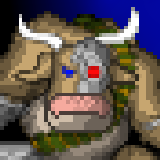 A giant Kraken that attacks the party on the ship in the sea.

A giant grey dragon that takes Ember's role as a boss in Cthulhu's Angels mode. 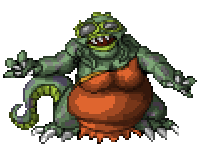 A big, obese, hideous creature that dwells in the lowest floors of Marsh Factory. 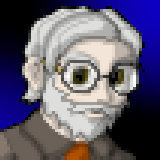 The narrator of the story. He constantly interacts and converses with Cthulhu and other characters, and also he can rewrite the history at his own will by adding more monsters and obstacles.

He also acts as the main antagonist of the Cthulhu's Angels campaign, where he acts more hostile and denies Cthulhu his true hero position, which prompts heroes to rush into his library to kill him and bring back the freedom of choice. 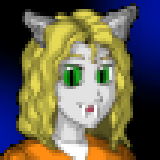 A were-zompire from one of the earlier works of Zeboyd Games, Molly appears as a fourth party member in Cthulhu's Angels campaign by coming out of portal created with her cellphone.