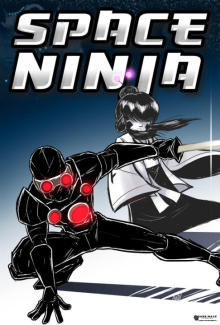 The series is about Ninjas IN SPAAAAACE! And so much more.The Space Ninja fulfills his duties to his Master, the Demon Lord. He ruthlessly kills those who try to prevent him from carrying out his mission, until he spares the life of a young girl and her uncle who return the favor when the injured Ninja is left behind by his teammates. After a second attempt on his companions' lives, the Ninja kills his fellow ninjas in their defense officially becoming an enemy of the state. But when Uncle dies in the attempt, he and the girl travel throughout the world together to sabotage and defeat the Demon Lord.

You can watch it on Blip.tv