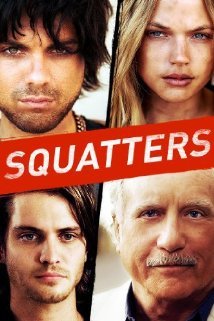 Squatters is a 2014 American film.

Jonas (Thomas Dekker) and Kelly (Gabriella Wilde) are two young homeless people in Venice beach. Living a life of drugs, partying, and petty theft, they have nothing but each other. Then, one day, Jonas overhears Evelyn Silverman (Lolita Davidovich) telling her maid that they will be on vacation for four weeks, including the house security code. While the Silvermans are away, Jonas and Kelly move in to live the high life for a few weeks, with Jonas planning to sell the contents of the house before they go. Except, something else happens... the Silverman family comes home early, escalation the situation to one of betrayal, violence, and love.