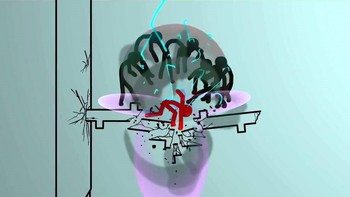 The story follows the stick figure Mr. Red who applies for the role of janitor at the business of Mr. Green. What sounds like a mundane task turns out to be the most intense job application ever as Mr. Red fights his way through hordes of Mr. Green's workers before facing off against Mr. Green himself to earn the position. Aiding Mr. Red is his "Shock" ability, which grants him a brief burst of Super Speed, and challenging him is Mr. Green's Self-Duplication ability.

The series is notable for its incredible sense of speed, largely accomplished through its use of Bullet Time and blindingly fast movements. The first and second Shock animations were released as a back-to-back two-parter. A third entry, "Shock 3", was released years later, showing Mr. Red's annual review.

A tribute to the series, simply titled "Shock Tribute", was released by the animator Jcamelo as an Interquel to "Shock 2" and "Shock 3", showing Mr. Red asking Mr. Green for a raise. Another tribute, titled "Shock More", was released by David "Geo" Borja, as a Distant Sequel to the main series. The entire series and its two tributes can be viewed on StickPage here

Of related interest is "Project Retribution", another Stick Figure Animation created as a tribute to Shock by Sareth Waldrouk, and also contributed to and tested by Terkoiz. Like Shock, it is notable for its extreme use of the Flash Step, and can be viewed on StickPage here

This flash series contains examples of: