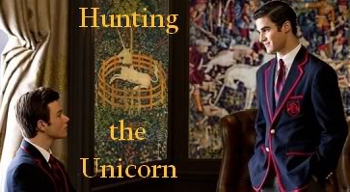 Harsher in Hindsight: The Fan Fic.
"Here is there, and high is low; all may be undone. What is true, no two men know; what is gone is gone." Fairy tales are harder to live through than you'd think.
— The story's summary.
Advertisement:

Written by CrossoverQueen (aka Sharysa) in 2011, this is a character study of Kurt Hummel and Blaine Anderson from Glee. Like many Klaine-centric fanfics, Hunting the Unicorn takes place before and during Kurt's time at Dalton Academy. Unlike many fanfics, it is influenced by The Last Unicorn and written in a similar style.

The author originally planned it as a short piece that addressed Kurt's characterization switch from the beginning of the show to the episode "Sexy," but she discovered that the Dalton Arc and the novel's plot and themes matched up very well in her head, and the story quickly became a Deconstruction Fic of Kurt and Blaine's relationship. It draws parallels between the Glee characters and those of The Last Unicorn, though with the current length, they are becoming much looser.

Excerpts and poetry from the novel set each chapter's tone, and several scenes are inspired by parts of the book. While it is certainly not a happy story, there are lighter moments that keep it from being too depressing. The plot is fairly simple and revolves around fleshing Blaine and the Warblers out, though it takes a huge surge when Blaine turns out to have a stalker called Alex in the thirteenth chapter. Alex later kidnaps him, Wes, and David in the nineteenth chapter. And several chapters later, it becomes a three-way crossover between Criminal Minds and Firefly. Later on, it becomes a four-way crossover by adding Game of Thrones to the mix.

Read it on FanFiction.Net here

, or Archive of Our Own here

. It was also on the unrelated and now-defunct Gleefic Archive, where it gained status as a Featured Story.

After a Schedule Slip of nearly two years, updates have resumed. According to authors' notes and Archive of Our Own stats, it's going to be the first installment of the "Griffin Slayer" series.