This is the character sheet for Happiness Charge Pretty Cure 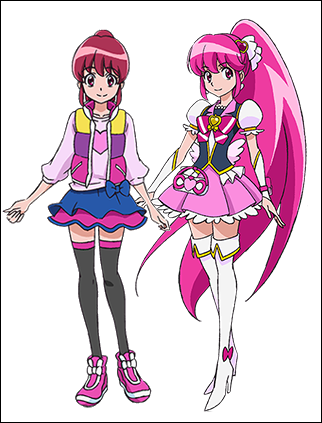 The big love spreading throughout the world! Cure Lovely!

An upbeat and energetic girl, Megumi is an otherwise normal middle school student until she is hit with a Love Crystal thrown by Hime. Megumi quickly befriends the other girl and defends her from a Saiark, causing her to become Cure Lovely. She eagerly accepts her new role, and protects her city while helping Hime. 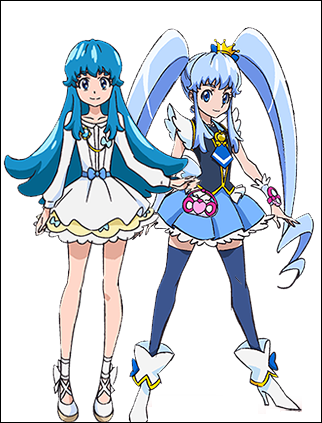 The blue wind dancing in the skies! Cure Princess!

Hime is the Princess of the Blue Sky Kingdom, who escaped when it fell to the Phantom Empire. Although she can be childish, she is shy around new people and lacks confidence as a Pretty Cure. After meeting Megumi, she begins to grow out of this and starts making friends. She also becomes a better Pretty Cure.

Hime's secret is that she freed the Phantom Kingdom from their imprisonment. It's revealed she was tricked into doing so. 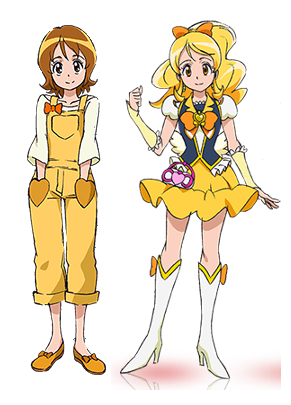 The light of life from the Earth that bears fruit! Cure Honey!

One of Megumi's childhood friends, Yuko is a kind and compassionate girl who's always willing to give out candy. She works at her family's takeout meal shop, which means that food is a large part of her life.

When fighting a Saiark, Megumi and Hime are helped by an unknown Pretty Cure, Cure Honey. Honey soon reveals herself as Yuko, who gained the power to become a Pretty Cure from one of Blue's Love Crystals. She then joins the others two Cures. 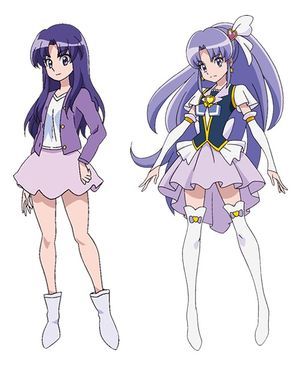 The star of hope that glitters in the night sky! Cure Fortune!

Cure Fortune is a powerful and solitary Pretty Cure that fights in Pikarigaoka City. She treats Cure Princess with nothing but contempt. Initially even Blue doesn't know who she is, but she reveals that she is the younger sister of Cure Tender, a Pretty Cure that was captured by Phantom. Having taken her sister's PreCards, she is fighting to rescue her sister.

Iona is introduced as a high-achieving student who goes to Hime and Megumi's school. Iona is also an accomplished martial artist, as her grandfather runs a karate dojo. After several encounters with Happiness Charge Pretty Cure, Iona reveals that she is Cure Fortune, and asks Megumi and Yuko to work with her. However, she refuses to work with Hime as she blames Hime for her sister's imprisonment.

After a series of events, Iona loses her transformation PreCards to Phantom. In order to make amends, Hime gives Iona enough PreCards to make a wish. Iona realizes that she wants the power to save everyone and wishes to become a Pretty Cure again. Afterward, she makes up with Hime and joins the group. 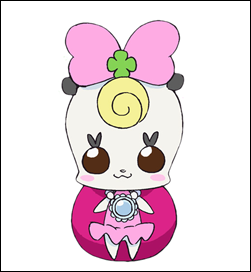 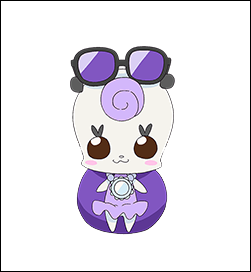 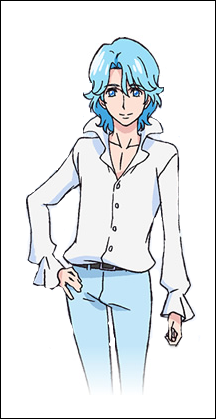 Voiced by: Shouma Yamamoto
The god/spirit of the Earth. Using magic mirrors, he can view almost anything and go to almost anywhere on the planet. He often stays at the Blue Sky embassy in Japan, where Hime and Ribbon live. Almost all of the Pretty Cures of the world received their powers from one of his Love Crystals.
Seiji Sagara 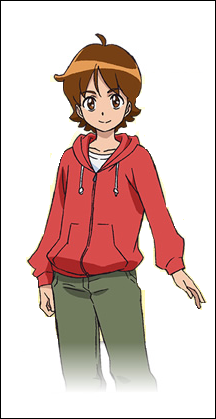 One of Megumi's childhood friends, Seiji's hobby is martial arts. In fact, he goes to the dojo run by Iona's grandfather. He quickly discovers that Megumi and Hime are Cure Lovely and Cure Princess, and offers to help keep their secret.

Miyo Masuko
Voiced by: Sachiko Kojima
A reporter with her own TV show "Pretty Cure Weekly", which is focused on all the Pretty Cures in the world. Her reporting brings her into contact with the Happiness Charge Pretty Cures.
Maria Hikawa (Cure Tender)
Voiced by: Sanae Kobayashi
The sister of Iona Hikawa. Before the beginning of the series she was defeated and imprisoned by Phantom. Iona took her Transformation Trinkets to become Cure Fortune.

Late in the series, Queen Mirage brainwashes Cure Tender to be her servant. However, she is purified by Happiness Charge Precure and returns to normal.

General
The villains. Many years ago, they were sealed away in the Axia Box. When the Box was opened, they came out to spread misfortune and remake the world in their image. They currently reside in the Blue Sky Kingdom, which has been completely transformed.
Queen (Cure) Mirage
Voiced by: Mariko Kouda 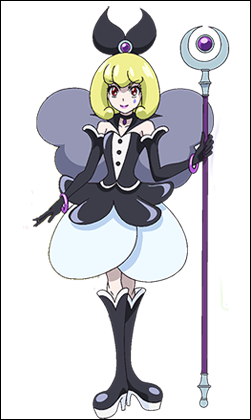 The ruler of the Phantom Kingdom. She wishes to spread sorrow throughout the world, but generally lets her minions do all the work.

300 years ago, she was a shrine maiden and Pretty Cure in Pikarigaoka who fell in love with Blue. Despite returning her feelings, he refused her under the belief that, as a God, he can't favour a specific person. Near the end of the series, she returns to her previous self after being purified by the Cures and Blue finally gets the chance to admit that he still loves her. 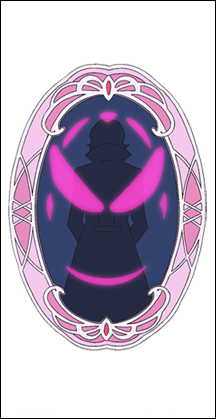 A talking mirror that advises Queen Mirage. Actually, he controls Mirage and the generals.

His true identity is Red, a god that opposes Blue. And his brother. 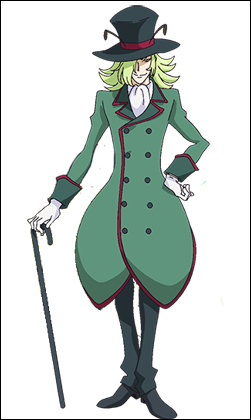 The first general encountered. Namakelder is a bug-like man who really doesn't want to do anything. His Saiarks create mold. 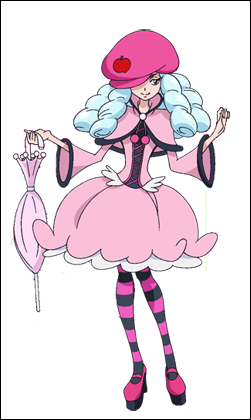 The second general encountered. Hosshiiwa is extremely selfish and has her Choiarks wait on her hand and foot. Her Saiarks turn things into sweets. 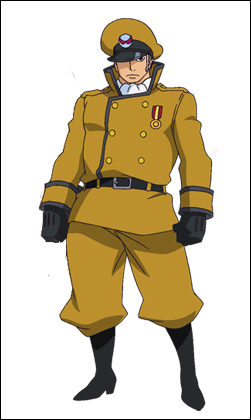 The third general encountered. Oresky is extremely arrogant and can't stand anyone having more motivation than he does. His Saiarks create barren wastelands. 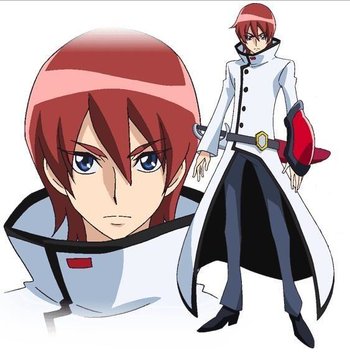 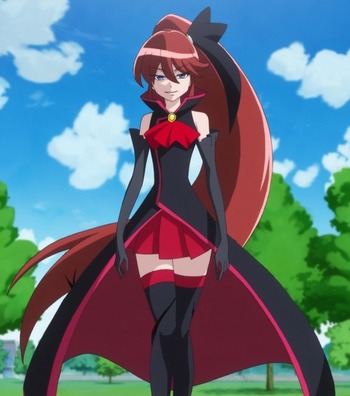 A powerful "Pretty Cure Hunter" who has been trained specifically to defeat the various Pretty Cure around the globe. He is utterly devoted to Queen Mirage and has a seething grudge against Blue. His Saiarks create crystals. 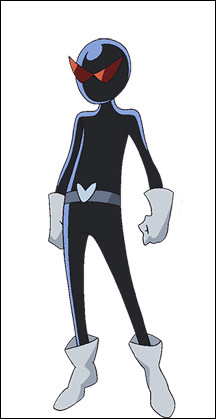 The Mooks of the villains. 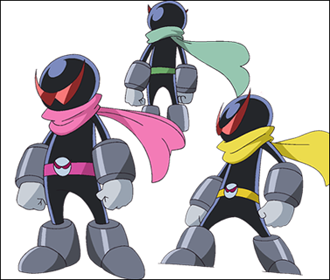 The Monsters of the Week of the series, who are summoned by the Quirky Miniboss Squad.

The Prince of the Doll Kingdom. Actually one of Tsumigi's dolls.

A Phantom Kingdom general and the villain of the movie. His Saiarks create spider-like threads.