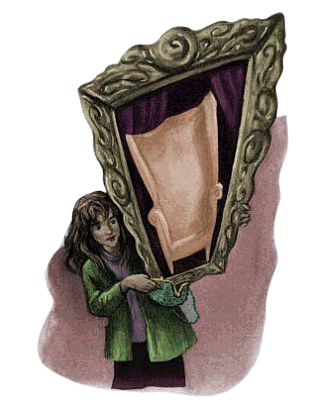 You think that's practical? Wait until she pulls that chair out of the painting...
Kady: I'm looking for a Bag of Holding... whatever that is.
Kareem: It's a Doctor Who kind of thing. A bag that's bigger on the inside.
Whitley: Actually it's a D&D thing.
— The Magicians (2016), "The Side Effect"
Advertisement:

Because of the sheer amount of goods you can store in one, trying to find something specific usually results in a Rummage Fail. Except, of course, in videogames where time itself will stop to let you go through your inventory in peace.

The Trope Namer is Dungeons & Dragons, whose "Bag of Holding" is a common and invaluable magical item; it also has an Evil Twin, the Bag of Devouring, which looks the same but will eat anything you put in it.

A Portable Hole is a similar device. In universes where the two coexist, it's never a good idea for them to intermingle (i.e. don't put the portable hole in the bag of holding...)

In RPGs you can have an entire Hyperspace Arsenal in Trouser Space, capable of holding a Hyperspace Mallet or... an RPG.

A Sub-Trope of Reduced-Downtime Features. Compare Clown Car and Clown Car Base. See also Bag of Sharing and Bag of Spilling.

See also Bigger on the Inside, for an entire room or building that is that.

Contrast Stomach of Holding, which is when a character eats whatever they want to hold.

The Nerd packs for an expedition to find the bad Tomb Raider games. He stuffs his backpack with various oversized weapons.

The Nerd packs for an expedition to find the bad Tomb Raider games. He stuffs his backpack with various oversized weapons.