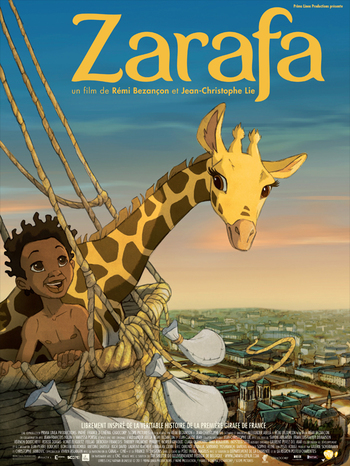 The film focuses on a young slave boy named Maki who, while escaping his master, Moreno, encounters a baby giraffe whose mother is killed by the master. Before he could be taken back into the slave camp, Maki is rescued by a nomad named Hassan, who names the giraffe Zarafa and looks after them both. They come across a merchant named Mahmoud, who gives them a pair of Tibetan cows named Mounh and Souhn. Then Maki discovers his friend, Soula, being abused by Moreno. The two are once again saved by Hassan. It turns out that Hassan is actually trying to reach Mehemet in Egypt, who wishes to offer a baby giraffe to king Charles X in Paris. Accompanied by an areonaut named Malaterre, the group decides to take Zarafa there in a balloon.