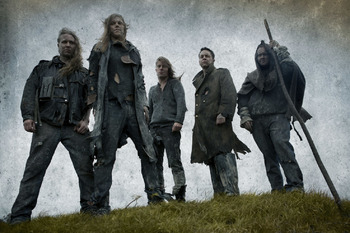 The band circa 2011.
Moonsorrow is a Folk Metal band formed in Helsinki, Finland, in 1995, by cousins Ville and Henri Sorvali, and later expanded into a full band. Taking their name from the Celtic Frost song "Sorrows of the Moon", the band incorporates influences from disparate genres such as film scores (Danny Elfman is a cited influence), Progressive Rock (band members have named King Crimson as a particular favourite), and, of course, Black Metal. The band describe their sound as "epic heathen metal" and try to distance themselves from the term "Viking metal", not least of which because, being Finnish, they have no lyrics about Vikings. Their sound is nonetheless not entirely far removed from what one might expect to hear from the Viking metal genre, albeit probably even more epic.
Advertisement:

The band is notable for its expansive instrumentation, incorporating far more diverse arrangements than one might expect from a typical metal band. The band's vocals are also quite impressive, often featuring full (and very well done) choirs alongside the traditional Metal Scream expected of Black Metal influenced Folk Metal. They have also demonstrated a pronounced tendency towards Epic Rocking, with three songs on recent releases exceeding twenty-five minutes in length (Hävitetty is comprised exclusively of Epic Rocking).

The band announced in 2012 that they had signed to Century Media and are working on a new album. They also announced in 2013 a fourteen-LP box set to be released via Blood Music, entitled Heritage 1995-2008: The Collected Works, that has been marketed as the largest metal retrospective ever produced (although it was later outdone by the label's Emperor box, which contained twenty-four LP's). It was released in October 2014.

Tropes exhibited in Moonsorrow's work or applicable to the band include: