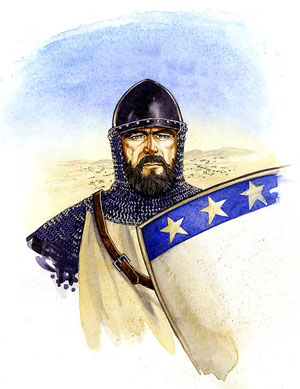 James Douglas, Lord of Douglas, better known as Black Douglas or "Good Sir James" was a Scottish war hero of the First Scottish War of Independence, and Number Two to Robert the Bruce in military affairs.

Not much is known about his early life (even his year of birth is uncertain, usually given as somewhere between 1286 and 1290), but it is known that he was the heir to Clan Douglas, and was sent to Paris in the early days of the war against the English, where he was educated and where he served as The Squire for William Lamberton, the Bishop of St Andrew's. When he came back to Scotland, he found out his family had lost all of his lands due his father's defiance of the English. He pleaded for King Edward I to return his lands. He refused.

This proved to be unwise. James Douglas joined with Robert the Bruce, claimant to Scotland's throne, and served as one of his main lieutenants. He led battalions, delivering the English some of their most dramatic defeats in the entire war and striking terror into their hearts. Soon the English dubbed him Black Douglas.

Alongside Robert he triumphed over the English at Bannockburn, and stood alongside him when he became King and lived in his royal court as a prestigious magnate of Scotland, border warlord, and ultimately Guardian of the Realm.

Black Douglas' last adventure came with his King's death. Robert's Last Request was for his heart to be carried in a Crusade (following up on an oath he had sworn, and been unable to follow up on in life), and Douglas was given the task. Carrying his King's heart in a casket, Douglas rode to several battles against the Muslims. Sadly, Douglas perished in the Crusade, and his body, alongside his King's heart, was carried back to Scotland. Neither of them ever reached the Holy Land. The Lords of Douglas added the King's heart to their coat of arms.