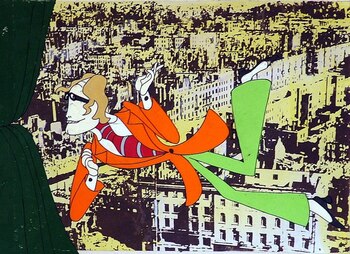 Ez csak divat (It's Just Fashion) is a very obscure and very cheesy 6 episode animated edutainment series by Hungarian avant-garde artist and animator György Kovásznai from 1976. "A music and dance magazine on the fashion of yesteryears" as the subtitle tells us, the show sets out to find out what fashion is by looking over the evolution of entertainment, music, clothing, hairstyle and freetime activity trends from prehistory up until modern times, but mainly from The '40s to The '70s.

As with the director's earlier shorts and his later (and only) feature film Foam Bath, the art and animation styles are very free-form, there's song and dance sequences aplenty, and a lot of soundbytes from everyday people commenting on the swiftly changing topics. This form of animated reporting defined Kovásznai's "anima verité" style. Presented by a trio of cartoon hosts and showcasing a large archive of stock photos and music, the show introduced the sheltered viewers of Communist Hungary to the then-latest Popular History of the West with a touch of spoof and satire but surprisingly little politicizing, even discussing events like the 1968 French student protests that state news had been silent about.

More than anything, this oddball show is a time-capsule of mid-20th century Western pop-culture as understood by the East Bloc's youth, and a mere footnote of the "golden age" of Hungarian animation. Some of Kovásznai's colleagues thought of it as a career misstep that lacked his subjective viewpoint and satirical "bite".

What is fashion, then? The final conclusion reveals that nobody really knows, but fashion sure is fashion.