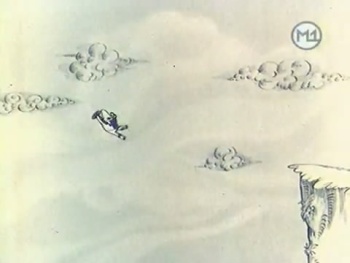 In a community where most of the citizens are serious, thoughtful wise men there is a strange man who dreams of flying. He makes himself pair of wings but he falls. Then he invents a series of devices but they all fare just as bad. But Icarus never gives up and tries something new every day.

Apart from the character of Icarus, this cartoon has nothing to do with epynomial greek myth. The original gave us an aesop about Icarus who boldly wanted to reach the sun and burned his wings trying, while this short tells a story about so-called 'wise men' preying on visionaries.

Icarus And Wisemen provides examples of: