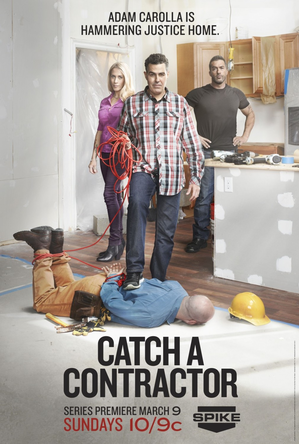 Why don't you just have a seat over there...
next to that unfinished kitchen.
Advertisement:

A Reality Show on Spike TV that aired from 2014-2015, hosted by comedian/Podfather Adam Carolla.

The premise is former carpenter/construction worker Adam, along with a husband/wife team consisting of a licensed and bonded contractor (Skip) and his private investigator wife (Alison), visit the homes of those who have been screwed over by a Crooked Contractor. The team then tracks down the crooked contractor, confront them, and shame/threaten/force them to come back and fix/finish the job, or face legal action.

The show is currently airing its third season, all shot in the Los Angeles area. It's meant to be a feel-good revenge show, with the little guy who has been taking advantage of others getting due from those that have wronged them, with Adam providing humorous commentary along with his own home improvement expertise. Its name is a play on To Catch a Predator (although the "To" part was dropped due to legal issues).