Characters / A Song of Ice and Fire - Tywin Lannister

Lord Tywin Lannister, Lord of Casterly Rock, Warden of the West, Shield of Lannisport, Hand of the King and Savior of the City

The Lion of Lannister, The Old Lion, The Great Lion of the Rock 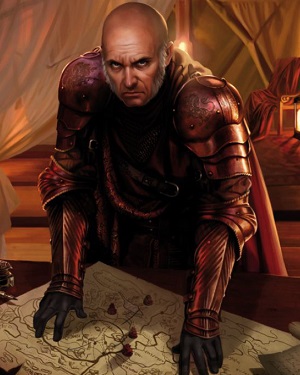 "If your enemy defies you, serve him steel and fire. But if he bends the knee, you must help him back to his feet, else no man will ever kneel to you."
Advertisement:

Oldest child of Tytos Lannister and his wife Jeyne Marbrand. Was married to his cousin Joanna, with whom he had three children, twins Cersei and Jaime and Tyrion. The patriarch of House Lannister, and former Hand of the King. He is the archetype of the powerful father. Obsessed with control and absolutely ruthless to enemies, he will destroy anyone who stands in his or his children's way. Tywin became cold and hard after spending a lifetime watching his kind and generous Lord Father being constantly manipulated and walked over by his bannermen and mistresses. He only became utterly cold after the death of his beloved wife, who was giving birth to Tyrion. Tywin is an extremely harsh and unforgiving man, terribly efficient at his job, and can't stand it when people laugh at him. It is well known that Tywin has never been seen smiling except on his wedding day and at the birth of Cersei and Jaime.