Characters / A Song of Ice and Fire - House Tarly

This is a listing of members of House Tarly who appear in A Song of Ice and Fire. 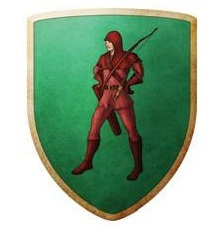 House Tarly is a vassal house sworn to House Tyrell in the Reach. Their seat is at Horn Hill, in the foothills north of Oldtown and the Red Mountains of Dorne. The current lord is Randyll Tarly, currently serving as Master of Laws at King's Landing under the rule of Regent Kevan Lannister. Lord Tarly's wife, Melessa Florent, their three daughters and youngest son Dickon have not yet been seen in the books, while his eldest son, Samwell, serves in the Night's Watch. They have at least one house, House Hunt, sworn to them. The sigil of House Tarly is a striding huntsman.

Not to be confused with House Tully, the Lords Paramount of The Riverlands

"You are almost a man grown now, and my heir. You have given me no cause to disown you, but neither will I allow you to inherit the land and title that should be Dickon's. Heartsbane must go to a man strong enough to wield her, and you are not worthy to touch her hilt. So I have decided that you shall this day announce that you wish to take the black. You will forsake all claim to your brother's inheritance and start north before evenfall. If you do not, then on the morrow we shall have a hunt, and somewhere in these woods your horse will stumble, and you will be thrown to the saddle to die...or so I will tell your mother. She has a woman's heart and finds it in her to cherish you, and I have no wish to cause her pain. Please do not imagine that it will truly be that easy, should you think to defy me. Nothing would please me more than to hunt you down like the pig you are. So. There is your choice. The Night's Watch..." (Rips out a deer's heart.) "Or this."

Head of House Tarly and Lord of Horn Hill. Randyll is married to Lady Melessa of House Florent and is the father of five children: Samwell, Dickon, Talla, and two more unnamed daughters. Many consider him to be one of best military commanders in the Seven Kingdoms, if not the best, and he is the unquestioned leader of the Reach's army. He is the current Master of Laws on the Small Council.

"If she saw me in my blacks, it might even make her proud. "I am a man now, Mother,” I could tell her, "a steward and a man of the Night's Watch. My brothers call me Sam the Slayer sometimes."
—Samwell Tarly

Melessa Florent is a member of House Florent, the eldest daughter of Lord Alester Florent. She is married to Lord Randyll Tarly and mother of Samwell, Talla and Dickon Tarly, as well as two other unnamed daughters.

Fifth child and second son of Randyll and heir to Horn Hill.

Lord of Horn Hill during the reign of Aenys I. Savage Sam was one of the principal lords who participated in the Vulture Hunt, chasing down the Vulture King after he began a rebellion against the Iron Throne.

The eldest daughter of Lord Donald Tarly and Lady Jeyne Rowan, she was the second wife of Lord Ormund Hightower. After Ormund's death during the Dance of Dragons, she began reciprocating the affections of her eldest step-son Lyonel. Despite being forbidden by the Faith, her relationship to Lyonel remained strong throughout the years.