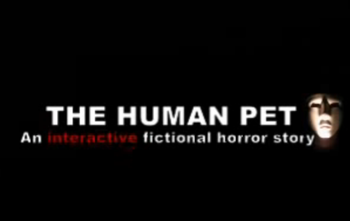 The Human Pet is an Alternate Reality Game webseries that began YouTube uploads in 2006 and reached its conclusion (or rather, stopped uploading) in 2008.

The videos showcased a young man named Eric Taylor being kept against his will in a room with nothing but a mattress. His captor, Sam Deercot, also known as "The Codemaster", gave the audience the ability to help Eric survive through picking which food he could eat and how to filter the pond water he was given. Later videos were uploads of Eric's own personal vlogs, detailing some of his actions that led up to his capture.

), there was also a channel dedicated to finding Eric (here

), a personal blog of Sam's, and a website for the search effort.