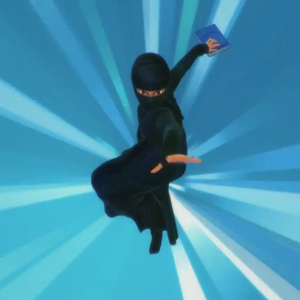 Don't mess with the lady in black.
Advertisement:

This animated series out of Pakistan stars the titular Burka Avenger, who, when not standing up for women's rights and education, is a mild-mannered schoolteacher named Miss Jiya. Orphaned at a young age, she was adopted and raised by Kabaddi Jan, who taught her the art of Takht Kabaddi, which uses school implements, like books and pens, as weapons. She wears the burka primarily to hide her identity.

Basically, she's Batman, if he'd decided to use books as his symbol instead of bats.

Featuring the voice of Ainy Jaffri. The series is created, directed and produced by international pop star Haroon

(AKA Aaron Haroon Rashid) with his production company, Unicorn Black

Jiya is named by American magazine Time as one of the most Influential Fictional Characters of 2013. In 2020 Burka Avanger had a comic book crossover where she team-up with hindu superheroine Priya's Shakti to fight the Covid virus by spreading awarness.