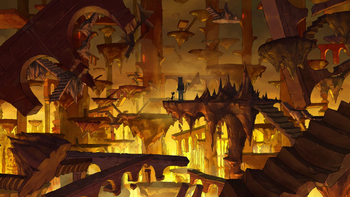 Elfo tries to find a way to get to Hell. Bean and Luci get to Hell. Zog finds out Merkimer survived the petrification.

In heaven, Elfo receives Bean's transmission, he realizes he needs to find a way to offend God in order to get to hell to meet her again. And through several attempts, he finally manages to do it by calling Jerry, whom God considered a new friend, a dum-dum.

Luci and Bean descend into Hell through the stairway, while bean fits in with the door guards, Luci is bullied relentlessly. They notice Elfo having been sent to hell, but in order to find where he is, they must use the Book of the Dead, locked away in a strange castle, the Infernal Stronghold.

Zog, alone in the kingdom, finds Merkimer, and the two hit off out of loneliness. While they are resting the Bozaks attack, still mad about the death of their admiral by Merkimer. While the two hide, the invaders end up finding Merkimer and taking him to turn into lunch. Zog gets his battle axe, and moved by the smell of bacon, finally fights the invaders.

Bean and Luci get to the Book of the Dead, only to be cornered by Asmodium. Luci turns on Bean, delivering her and Elfo to him and getting a promotion, which gives him wings. Both Bean and Elfo are dragged to their personal hell, where they relieve their worst moment over and over. It turns out that they're both locked together, being forced to watch the moment that Bean chose to bring back her mother instead of reviving a dead Elfo. The two have a fight that ends when Luci comes back, revealing his plan of making them suffer in order to get more power and be able to burst them out of Hell. Luci is able to just barely fly them away, when Asmodium finds them, he throws Elfo and Bean into a river of lava in order to get promoted again: this time bigger and more powerful, he is able to fly them off into the real world, but losing his powers and immortality in the process.

The trio rushes to find Elfo's corpse in order to put his soul back, and after a few scares, they manage to revive him.

In Heaven, Jerry is angry at God for letting Elfo resurrect and not him, proceeding God for not working, creating cancer, malaria, etc.