Film / One Night at McCool's 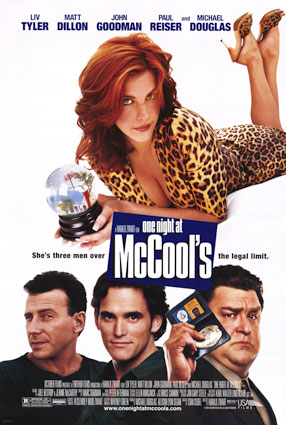 One Night at McCool's is a 2001 comedy film directed by Harald Zwart and starring Liv Tyler, Matt Dillon, Paul Reiser and John Goodman.

Randy (Dillon), a down-on-his-luck bartender at the epononymous McCool's has his life turned upside down when he encounters seductress Jewel Valentine (Tyler), whom he saves from what initially seems to be her abusive boyfriend Utah. After a turn of events ends up with Utah murdered, the two become a couple. However, not long afterwards, two more men; Randy's cousin Carl (Resier) who is a sadomasochistic lawyer, and police detective Dehling (Goodman) who is investigating Utah's murder and grieving the death of his late wife; also develop obsessions with Jewel. The three men develop wildly different opinions of who Jewel is and what she is like, and the film primarily consists of the three recounting their personal interpretations of various events pertaining to her.