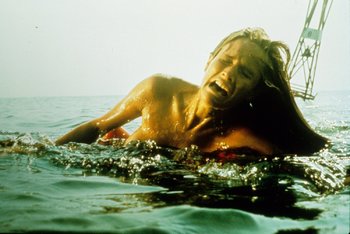 This is the movie that made you deathly afraid to go out in the water.
"Sometimes that shark looks right at ya. Right into your eyes. And the thing about a shark is he’s got lifeless eyes. Black eyes. Like a doll’s eyes. When he comes at ya, he doesn’t even seem to be livin’... ’til he bites ya, and those black eyes roll over white and then.... ah then you hear that terrible high-pitched screamin’. The ocean turns red, and despite all your poundin’ and your hollerin’ those sharks come in and... they rip you to pieces."
— Quint
Advertisement:

Jaws is a movie about a shark stalking its prey, devouring them piece by piece, with nary a noise nor expression. You bet your ass it has its scary moments. 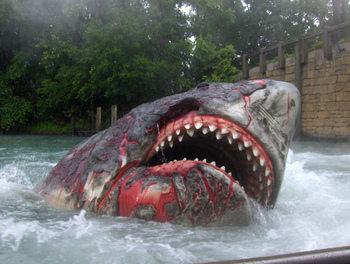