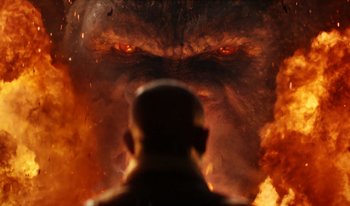 The most terrifying monster of all face-to-face with King Kong.
While the new Godzilla had its own share of horrific things, Kong: Skull Island is nothing short of nightmarish at times. From the new fauna and Kong's size, to the very concept of the film, there's a reason why this film could give someone nightmares.
Advertisement:
open/close all folders
Pre-Movie
Post-Movie
Novelization