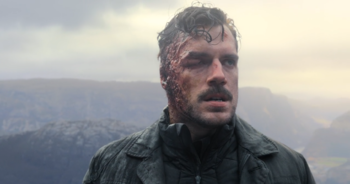 Superman finally becomes Two-Face... in the worst way.
"There cannot be peace without first a great suffering. The greater the suffering, the greater the peace."
— John Lark
Advertisement:

Mission Impossible: Fallout is one of the darkest entries in the franchise, not only because of its duller color palette, but also due to the amount of unexpected horrors on display.
As a Nightmare Fuel page, all spoilers are unmarked. Proceed with caution.