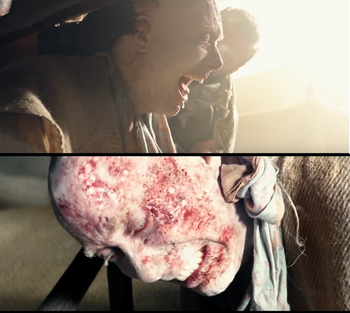 "Beware the light", indeed.
Laura: You had a nightmare.
Logan: Do you have nightmares?
Laura: Sí.Translation "Yes" in Spanish. People hurt me.
Logan: Mine are different.
Laura: ¿Por qué?Translation "Why?" in Spanish.
Logan: I hurt people.
Logan got its "R" rating for many good reasons. Strong language, dismemberments, eviscerations, its sheer usage of blood... the list goes on. People expecting PG-13 violence are in for a shock.
Advertisement: