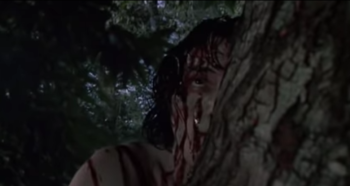 Billy was right; they were being hunted.
Billy: I'm scared, Poncho.
Poncho: Bullshit. You ain't afraid of no man.
Billy: There's something out there, hunting us... and it ain't no man. You're all gonna die.
Advertisement:

Like its Alien counterpart, Predator has had its fair share of nightmarish moments, mostly revolving around the titular antagonist.