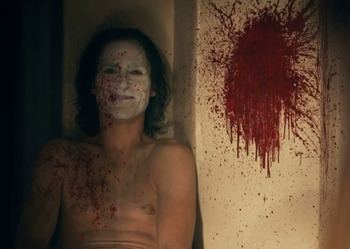 "I've got nothing left to lose. Nothing can hurt me anymore."
Being an R-rated origin story about the most dangerous enemy the Dark Knight has had to face, it should come as no surprise that Joker has disturbing moments, on a physical and emotional level.
Advertisement:

Isn't it rich / Aren't we a pair
Me here at last on the ground / You in mid-air
Send in the clowns...