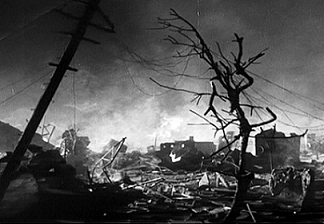 And the city was dropped... by a radioactive dinosaur.
Advertisement:

With aliens that can pose as human beings, kaiju that stand taller than many of our modern buildings, the possible threat of enormous, heavily-armed robots destroying the home you love and plots to steal science experiments for profit (and world conquest) and various other horrible things, it's no wonder the Godzillaverse is a Crapsack World. And add planet-killing space hydras to that list and....yeah, it's kinda nightmare-inducing.