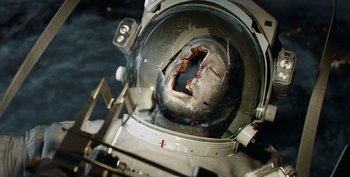 This is what happens when pieces of space debris hit your face at Mach 20.
Advertisement: