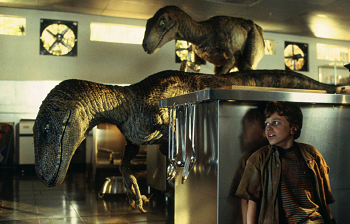 "Come out, kids. We just want to have you for dinner."
A series of dinosaur movies, two of which are directed by Steven Spielberg, with video games and huge toy lines. Sounds perfectly kid-friendly, right?
Advertisement:

You couldn't be more wrong.

As many young fans found out the hard way, Jurassic Park is frightening in the dark. After all, it's about dinosaurs being recreated in our world, including carnivorous species... What Could Possibly Go Wrong?

Hold on to your butts...