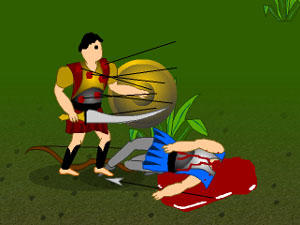 It's just a flesh wound!
Warlords: Heroes is a side-scrolling Beat 'em Up from Ben Olding Games, a Spinoff of Warlords: Call to Arms, an Adobe Flash RTS by the same person. The player takes control of Ellder, a Night Elf Whirler; Aldon, Prince of the Men of the West (Swordsman), or Toldor, an Orc Longswordsman.
Advertisement:

Playing each character constitutes an "Episode", and while each Episode does not necessarily have to be played in order, all three must be completed before you can go on to Episode Four and complete the story. The game also includes a Survival mode and a Gladiator mode, in which you must face, in sequence, a number of powerful opponents.

The game is available with all of its features at Kongregate

. Fans of Ben Olding might notice the similarity between Warlords: Heroes and an older game of his called "Achilles" or even the Dragon Fist series. They all use the same engine.