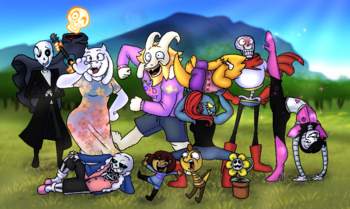 is a fan-webcomic based on Undertale, taking place after the True Pacifist ending. It is run by the staff of The Good Trash Kingdom

In-universe, the blog was created by Frisk to answer any questions humans might have about monsters; however, after the divide between the void and AFAC's reality was weakened, the characters began to hear the asks directly. The comic is now on its sixth story arc.

The official dubs of the comics can be found here