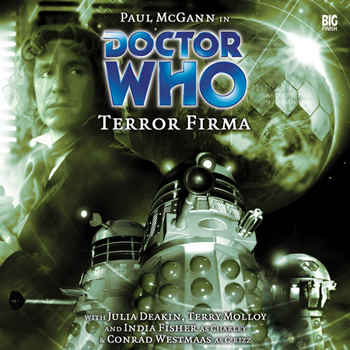 The Daleks excel at extermination in every variation thereof. That includes memories.

Ever get the feeling you've forgotten someone important? The Doctor did. And this time, it's not his spotty memory to blame...

Back from their extended stay in the Divergent Universe, the Eighth Doctor and Charley plan to show C'rizz everything the regular universe has to offer. They're interrupted by Davros and a whole army of Daleks, who have taken over future Earth and turned the majority of its eight billion people into Daleks.

Although Eight is incredibly bouncy and happy at having regained his time senses, he goes into Tranquil Fury once he realises just what Davros has done. But Davros has some problems of his own: after the Doctor destroyed Skaro, Davros escaped, but his body is once more decaying. And he's fused himself to the Dalek Emperor and prepared a clone body in a bid to stay alive. The Dalek part of his new consciousness is slowly taking over (making him a rare case of a double Large Ham), and he needs to transfer to his clone body as soon as possible. The Doctor is to help him, and witness the destruction of Earth, as punishment for his deeds. If the Doctor instead murders Davros (which he very, very seriously considers), Davros' death will set off a virus that would kill everything on Earth.

Charley and C'rizz, meanwhile, get seperated and meet with La Résistance members Gemma Griffin and her suicidal brother Samson. Samson has forgotten that he ever had a sister, and his mother Harriet explains that Gemma vanished long before the Daleks arrived. As it turns out, the two siblings travelled with Eight for a long time — until they were captured by Davros one day, implanted with Robomen technology, and released back on Earth. Samson unknowingly lived as a Dalek spy while Gemma travelled the Earth to spread The Virus. Neither of them remember the Doctor. What's more, Davros operated on the TARDIS long ago, fitting her with a tracking device that allowed him to view the Doctor's adventures even in the Divergent Universe. The Doctor was made to forget that Gemma and Samson ever existed, but noticed that there was something wrong with the TARDIS when he woke up, and went looking for her manual just minutes before accidentally meeting one Charley Pollard aboard the R101.

Meanwhile, the Daleks are rebelling against Davros (as per usual) and pick C'rizz as their next Emperor. After all, he's a natural killer.

The Doctor eventually meets up with La Résistance, defeats (and seemingly kills) Davros, and gets the Daleks to leave Earth. The world will rebuild itself. C'rizz is rescued, Samson's Dalek parts are removed from his skull, and all's well that ends well...

... until we find out that C'rizz carries with him the spirital remnants of everyone he's ever "saved". And since he can hear all of the dead with perfect clarity, their confusion at no longer being in the Divergent Universe keeps him wide awake at night. He knows he'll probably end up "saving" the Doctor and Charley as well, someday.