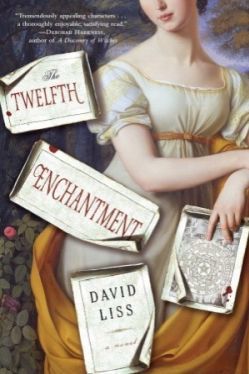 The Twelfth Enchantment is a 2011 novel by David Liss. Lucy Derrick is a women of good breeding, and bad repute. When she was 16, she ran off with a man Jonas Morrison, and her tragic life began. Her sister died, her father died, and she was forced to live with her uncle, and his maid, who spend their time making Lucy miserable and trying to marry her off to a mill owner. Things change for Lucy when Lord Byron collapses at her home, leading her into magic and adventure. Will she defeat the mysterious forces gathering against her and all of England? This novel is set against the backdrop of a rapidly industrializing England.