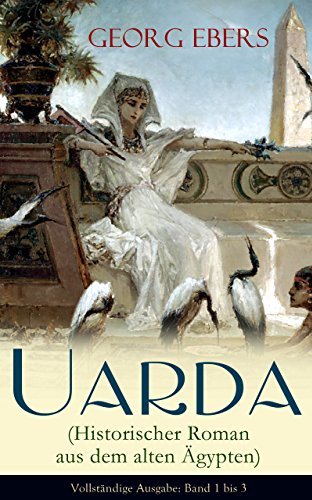 Uarda by George Ebers is a seriously dated historical romance set in ancient Egypt. Ebers was a 19th century amateur Egyptologist best remembered as the owner of an important medical papyri known by his name. The title Uarda is a mystifying choice, seeing as the girl is in fact a very minor character. She is, on the other hand, the catalyst that sets off the whole novel. Uarda is accidentally run over by the chariot of Princess Bent-Anath, favorite daughter of Rameses II. Bent-Anath carries the injured child home to her grandparents whereby which she becomes ritually unclean as they belong to a Pariah class of Necropolis workers. Bent-Anath's refusal to submit to a ritual cleansing brings her into conflict with the High Priest at the head of the college of King Seti. The morning after the accident Uarda's humble hut serves as a general rendezvous during which we meet all our primary characters: our hero, the tiresomely noble and perfect Pentaur who is a priest of the College of Seti, and the much more interesting and sympathetic antagonist the imperfect, tormented and unhappy Paaker. Of course we are supposed to root for Pentaur but the modern reader is much more likely to sympathize with Paaker.As is common with 19th century novels the long arm of coincidence is worked to exhaustion and the plot is stuffed full of tropes making it eminently predictable - at least to 21st century readers.