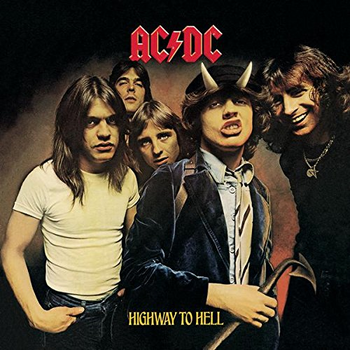 Hey Satan, paid my dues/Playing in a rocking band/Hey mama, look at me/I'm on my way to the promised land, whoo!

Highway to Hell is the sixth studio album by AC/DC, released on July 27, 1979. It was their final album with Bon Scott, who died on tour before their next album Back in Black was released. The album was supported by the Title Track, "Girls Got Rhythm", and "Touch Too Much" as singles—the title of the album and the song actually caused a lot of controversy, which may have helped its sales, being their breakthough album in the States, peaking at #17 on the billboard charts. Since its release it has received unanimous critical acclaim as one of the greatest hard rock albums of all time, being ranked at #200 on Rolling Stone's 2012 list of their 500 Greatest Albums of All Time, and is currently the 268th-most-acclaimed album of all time on Acclaimed Music's compilation of various critics' lists.