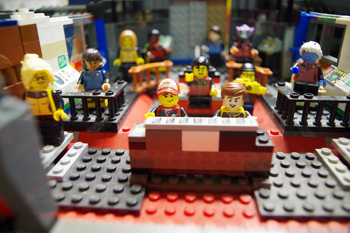 The Intrepid Crew of the... Intrepid
Advertisement:

, written and photographed by Travers "Swiftbow" and Rioux "Brogen" Jordan, is a webcomic following the exploits of Federation Star Defense, a division of Starfleet. Set in an alternate Star Trek universe (related to the Kelvin timeline), it takes place in the Next Generation era, starting at the equivalent of season 3 of TNG.

Commodore Jeffrey Bannister, whose heart is in the right place, even if his brain doesn't always keep up, encourages the formation of the new division to deal with new threats in the Federation. A resistant Admiralty goes along to get him (and other Starfleet misfits) out of their way.

But threats do come, in the form of the dangerous, yet pre-warp species, the Tajarans and their unstoppable Slow Dimension. Will these Federation cast-offs be able to save their ship and the peaceful planet Wogglenather? And what other threats may come?

And, oh yeah, it's done with LEGO. The creators previously finished another Lego webcomic in 2019, Harry Potter Comics.