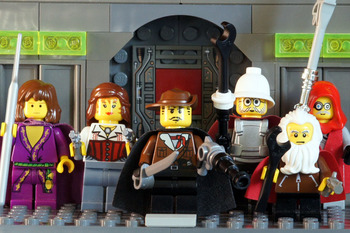 Xenoarchaeologist is a LEGO photo story set in the Warhammer 40,000 universe. This means the text with illustrations done in LEGO. While real LEGO sets and minifigures are used for most scenes, the spaceships and most epic scenes are made with CGI. The first part of Xenoarchaeologist was made by Felix Sapiens (Farseer), Illarion and Artlego, the users of The Russian Fan Forum of LEGO, while the remaining parts were made solely by Felix Sapiens.

Xenoarchaeologist can be described as LEGO Adventurers IN WARHAMMER 40K! The first part is set in Egypt-like desert with Necron ruins while the second one moves to the deadly jungle.

Xenoarchaeologist is a trilogy. The parts are as follows:

Inquisitor Johann Donner of Ordo Xenos and his retinue visit a backwater desert world of Anubis to investigate alien ruins of unknown origins. He doesn't know that the mysterious pyramid was built by Necrons and that he will befriend the nameless Eldar Farseer. And he is about to meet his achnemesis, the heretic called Samuel Kruger who is interested in the ruins too.

The recap in English

The prologue in English

on Russian Fan Forum of LEGO (the final chapter has links to other chapters).

Advertisement:
Three years have passed sincce the events of Part One. Johann Donner chases Samuel Kruger across the Galaxy and arrives on Smert, the world covered in deadly jungle. Here he finds new mysterious alien ruins and some answers to his questions.

The recap in English

The prequel in English

The original prequel in Russian

on Russian Fan Forum of LEGO.

on Russian Fan Forum of LEGO (there is a link to the next chapter at the end of previous one).

Several months after the events of Part Two, Johann Donner finds out the recent location of Samuel Kruger. The heretic arrived at the hive city of Burtonopolis on world of Burton Primaris and is going to perform some dark ritual. Donner has to stop him once and for all.