There will come a day where you will be thrust into another world. A realm where four will gather: the Heir of Breath and the Seer of Light, the Knight of Time and the Witch of Space, and together they will Ascend.

The four central characters of Homestuck, present from Act 1 to Act 7. These four were friends for years, starting when Jade received a birthday present from John which he would make after becoming friends with her. This indirect form of communication would become the norm for the Kids, who would develop their friendship across the internet, throughout Armageddon, and in spite of death itself. They all have a symbol, an associated animal, a Guardian to Strife with, an instrumental Leitmotif, a favorite black male celebrity and a pejorative nickname.

open/close all folders
The kids in general 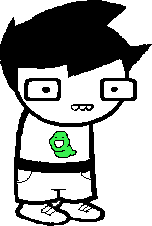 Paradox Space Appearances: "You Have A Feeling It's Going To Be A Long Day" | "John's Birthday" | "Prototyped" | "Con Faire" | "Quality Time" | "Killswitch Engaged" | "Deck It All"
You have a passion for REALLY TERRIBLE MOVIES. You like to program computers but you are NOT VERY GOOD AT IT. You have a fondness for PARANORMAL LORE, and are an aspiring AMATEUR MAGICIAN. You also like to play GAMES sometimes.

A fairly average boy living in suburban Washington with his father, on whose birthday our story begins.

He is the Heir of Breath of his session and the de facto leader. His Chumhandle is "ectoBiologist", formerly "ghostyTrickster".

He has filed a pair of STRIFE SPECIBI in his STRIFE PORTFOLIO: HAMMERKIND ABSTRATUS and BUNNYKIND ABSTRATUS. He is a clone of Nanna Egbert and Grandpa Harley's paradox ghost slime, and is Jade's biological brother.

types without capitalizing letters, but uses proper punctuation!
sometimes uses emotes and emoticons, but not frequently.
after act 5, he's a bit more prone to swearing and SHOUTING.
Rose

Paradox Space Appearances: "John's Birthday" | "Prototyped" | "A Fun Day For Jaspers" | "The Town Mouse and the Country Mouse" | "Her Pale Passions" | "Soul-Fraying Games" | "The Viceroy and the Lady Grimme" | "Go Fetch" | "Garbage Day" | "Secret Sufferer" | "Lady Grimme and the Red Knight" | "Three out of Five Hats" | "Summerteen Romance"
You have a passion for RATHER OBSCURE LITERATURE. You enjoy creative writing and are SOMEWHAT SECRETIVE ABOUT IT. You have a fondness for the BESTIALLY STRANGE AND FICTITIOUS, and sometimes dabble in PSYCHOANALYSIS. You also like to KNIT, and your room is a BIT OF A MESS. And on occasion, if just the right one strikes your fancy, you like to play VIDEO GAMES with your friends.

A girl with a fondness for psychoanalysis, writing, and wizards, who lives with her mother in an isolated mansion situated atop Rainbow Falls in New York.

She has allocated her STRIFE SPECIBUS with the NEEDLEKIND ABSTRATUS. She can play haunting refrains on her violin. She is a clone of Mom Lalonde and Bro Strider's paradox ghost slime, and is Dave's biological sister.

Types with stringent punctuation and capitalization syntax, with a tendency toward excessive verbosity.
After Act 5, she's prone to adding in some silliness. ;)
Dave

Paradox Space Appearances: "John's Birthday" | "Prototyped" | "Quality Time" | "Nak Worth" | "Indemnity Double Reacharound" | "Soul-Fraying Games" | "Garbage Day" | "Secret Sufferer" | "Lady Grimme and the Red Knight" | "Three out of Five Hats" | "Steward of Void" | "Summerteen Romance"
You have a penchant for spinning out UNBELIEVABLY ILL JAMS with your TURNTABLES AND MIXING GEAR. You like to rave about BANDS NO ONE'S EVER HEARD OF BUT YOU. You collect WEIRD DEAD THINGS PRESERVED IN VARIOUS WAYS. You are an AMATEUR PHOTOGRAPHER and operate your own MAKESHIFT DARKROOM. You maintain a number of IRONICALLY HUMOROUS BLOGS, WEBSITES, AND SOCIAL NETWORKING PROFILES. And if the inspiration strikes, you won't hesitate to drop some PHAT RHYMES on a mofo and REPRESENT.

A boy unceasingly devoted to the pursuit of (what he perceives to be) irony in all aspects of life, who lives with his Bro in an apartment in Houston, Texas.

He had allocated his STRIFE SPECIBUS with the BLADEKIND ABSTRATUS, but an incident with Bro and a "cheap piece of shit" turns it into the 1/2BLADEKIND ABSTRATUS. He is a clone of Mom Lalonde and Bro Strider's paradox ghost slime, and is Rose's biological brother.

He is also the author of Sweet Bro and Hella Jeff.

Paradox Space Appearances: "John's Birthday" | "Prototyped" | "A Fun Day For Bec" | "The Town Mouse and the Country Mouse" | "Go Fetch" | "Deck It All" | "Birds and Bees" | "Spritecon"
You are an avid follower of CARTOON SHOWS OF CONSIDERABLE NOSTALGIC APPEAL. You have a profound zeal for marvelous and fantastical FAUNA OF AN ANTHROPOMORPHOLOGICAL PERSUASION. You have an uncanny knack for NUCLEAR PHYSICS, and not infrequently can be found dabbling in RATHER ADVANCED GADGETRY. You enjoy sporadic fits of NARCOLEPSY; your love of GARDENING transcends the glass confines of your ATRIUM; and you are at times prone to patterns of PRECOGNITIVE PROGNOSTICATION.

A quirky, upbeat girl living alone on a remote island off the northeast coast of Australia, guarded only by her "dog" Becquerel and the taxidermied body of her late Grandpa.

She has allocated her STRIFE SPECIBUS with the RIFLEKIND ABSTRATUS and PAPERKIND ABSTRACTUS. She is a clone of Nanna Egbert and Grandpa Harley's paradox ghost slime and is John's biological sister.

Additionally, Jade's dream self spent some time as Jadesprite, her sprite prototyped with Becquerel and the corpse of her dream self. Jadesprite was merged back into normal Jade when said normal Jade ascended to the God Tiers, so tropes for Jadesprite are folded in here as well, as they are not really separate characters.

types with no caps or periods but often overpunctuates with exclamation marks and ellipses!!!!! she also likes to use smilies and hearts <3
as jadesprite she also barks occasionally woof woof!!!!!!
since reaching god tier she has a bit of a verbal tic woof!!
> Go Back