Series / Lizzo's Watch Out for the Big Grrrls 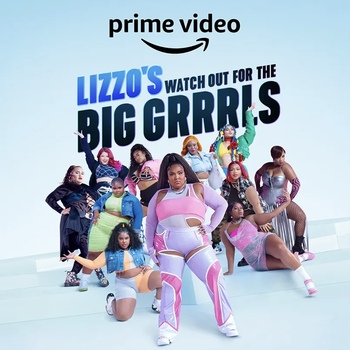 "You gotta serve it… or you get served!"
Lizzo's Watch Out for the Big Grrrls (yes, that's three 'r's) is an unscripted reality competition series. It's the first project the singer/flutist developed as part of a deal with Amazon Studios. The premiere was on March 24, 2022.
Advertisement:

Lizzo has a group of six dancers called the Big Grrrls. "But I'm a headliner now, motherfucker! I gotta be on headliner status. So I need more Big Grrrl dancers to fill the space onstage with me." To find more dancers, Lizzo turned to dance agencies but "they gave me nothin'!" She put out a call for big girls and out of thousands of submissions, she handpicked 13 women and brings them to L.A. But out of the 13, only 10 will get to stay and move in the luxurious house while they prepare to appear with Lizzo on the Bonnaroo festival which is only 21 days away.

The show was nominated in the Best Competition Program category at the 2022 Emmy Awards, resulting in a win and in Lizzo's first Emmy.

Watch out for the Big Trrropes!

You gotta serve it... or you get served!