The characters of the anime series Star Driver: 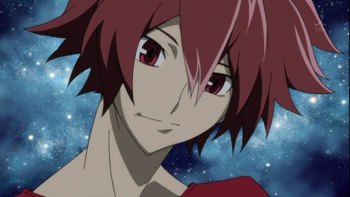 Protagonist of the series. He pilots the Cybody Tauburn, one of the mechs that was formerly hidden in the island's ancient ruin. He is a Star Driver and is directly opposing the Glittering Crux Brigade to protect Wako from them. 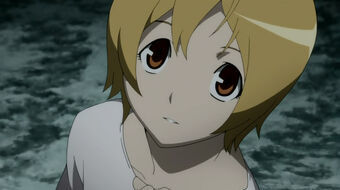 Heroine of the series. A member of the school drama club, "Midnight Flight." She is the South Maiden, who can unlock the seal of Southern Cross Island. She is pursued by the Holy Order of the Glittering Crux.
Voiced by: Saori Hayami 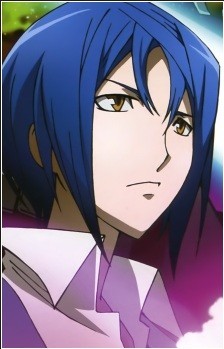 A member of Midnight Flight club along with Wako. He is engaged to Wako, but doesn't seem to mind that Wako takes an interest in Takuto.
Voiced by: Jun Fukuyama
Advertisement:
The Order of Glittering Crux
All or most of them provide examples of:

Leader of the Vanishing Age section, Head acts as the head of the Glittering Crux while waiting for someone to defeat Takuto and Tauburn to take leadership. Eventually he runs a coup and takes over the Crux himself with support from his branch. He pilots the Cybody Reshbal & later, the Cybody Sinpathy and wields the Star Sword Diamant & Turquoise.
Voiced by: Akira Ishida

Takuto's married classmate and member of the Glittering Crux Brigade under the name, "the President." She's in charge of the Adult Bank, with her section providing most of the monetary funds for the Crux. Her Cybody is Betraida.
Voiced by: Ayano Niina

Leader of Bouganville under the name "Ivrogne," Keito holds a secret that most of the Crux doesn't know. She is really the East Maiden, whose seal the Crux has to break in order to release the next phase for the Cybodies.
Voiced by: Ami Koshimizu

Leader of the Crux's Science Guild, she is also known as Professor Green. She's the school nurse and owner of the Cybody Yoddock.
Voiced by: Houko Kuwashima

Known as Sword Star of Vanishing Age. His Cybody is Zayinth which wields the Star Sword Grenat. After Head's coup, it's revealed he has a true mark.
Voiced by: Yūki Kaji

A rather callous, self-centred Vanishing Age Star Driver codenamed 'Camel Star' who resents his organisation's continued lack of progression to the fourth phase and the invasion of the real world, creating considerable friction with his leader, Head. Like the rest of his faction, has a true mark that allows him to pilot Cybodies in the third phase.
Voiced by: Ryohei Kimura

Known as Window Star, she's a member of the Adult Bank until switching to Vanishing Age after the Crux reaches phase three. She pilots the Cybody Hegent and has the Star Sword Perle.
Voiced by: Yukana

A member of Adult Bank under the name Needle Star. As a true mark holder, she switches to Vanishing Age once the Crux reaches the third stage.
Voiced by: Mitsuki Saiga

Member of the Adult Bank, Simone is Kanako's servant in the Crux and in her "civilian" job also. Codenamed Secretary, she is the pilot of the Cybody Daletos.
Voiced by: Ayana Taketatsu

A member of the kendo club, Takashi is also known as Banker. He works a Kanako's servant in the Adult Bank and his civilian life like Simone. He pilots the Cybody Tzadikt and controls the Star Sword Amethyste. After the cybercasket is destroyed and only true mark users can approvise, Takashi transfer to Vanishing Age as he also has a true mark.
Voiced by: Kenji Akabane

Also known as Undine, member of Bouganville. She pilots the Cybody Kaphrat.
Voiced by: Chiwa Saito

The member of Filament known as Raging Bull. George is also a member of the school's boxing club and is constantly seen working out. His Cybody is Alephist, which resembles his Crux name.
Voiced by: Shun Takagi

Another member of Filament, Tetsuya is also known as Speed Kid. Owner of the Cybody Tetrioht, who turns into a motorcycle.
Voiced by: Ooki Sugiyama

A middle-aged man who is often seen by Head's side. He opens the meetings of the Crux and seems to be in charge of Vanishing Age when Head is not around. He is the original owner of the rēš mark and has already been involved in the research of the underground ruins even before Head came to the island.
Voiced by: Shin-ichiro Miki

Known as Professor Silver, he is one of the oldest members of the Order, currently working for the Science Guild under Professor Green. Had a hand in designing much of the Crux's technology, including the Cybercasket and the Overphase System.
Voiced by: Nobuo Tobita

A youthful-looking man, currently in a coma. First seen at the hospital when Head comes to visit in episode 17, where his condition seems to be heavily monitored. In Katashiro's flashback, it's shown that Shingo is the bearer of the Šin mark, a mark he had meant to pass on to Head. Head supposedly seduced Shingo for this very purpose, hungry to pursue the power of the Cybodies. However, before he could give Head the Šin mark, Shingo fell into a comatose state for a reason and manner so far unexplained, and now, Head and the research division are watching his vital signs carefully, as it seems that he is resurfacing from the deep sleep he was trapped in.
Voiced by: Shintarō Asanuma
Other Characters

The West Maiden and twin of Marino.
Voiced by: Rina Hidaka

President of Midnight Flight and leader of the resistance opposition against the Glittering Crux Brigade.
Voiced by: Maaya Sakamoto

The North Maiden. Her seal was broken and was imprisoned in a cage by Head, but was let go and went on a journey.
Voiced by: Haruka Tomatsu

Takuto's childhood friend, he is the original owner of the "hearing the voice of the world" catch phrase.
Voiced by: Miyu Irino

A girl who befriended Head Tokio the first time he came to the island, she was Katashiro's fiancee. While she was in love with Katashiro she always felt that her feelings were unrequited. As time went by she fell in love with Tokio and got pregnant, resulting in Takuto's birth.
Voiced by: Fumiko Orikasa