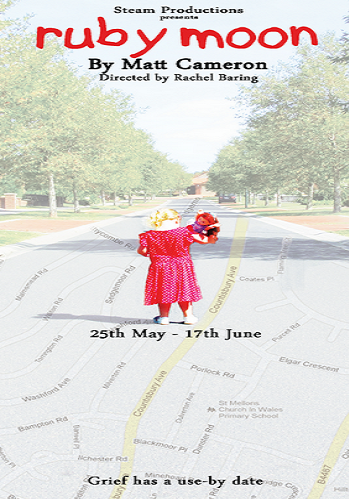 Ruby Moon is an Australian play by Matt Cameron written in 2003. The story revolves around Sylvie and Ray Moon, a couple from the fictional town of Flaming Tree Grove, who are struggling to come to terms with the mysterious disappearance of their young daughter, Ruby, who left to visit her Grandma and never came back. The case has long gone cold, and they're almost ready to give up hope, until the arm of Ruby's doll turns up in their letter box. Desperate for answers, they go up and down the street and interview their neighbors about the incident. They encounter many eccentric characters, including a bible-thumping old woman, an ex-soldier who still lives with his mother, Ruby's creepy babysitter and even a mad scientist. Any one of them could be responsible. Through the play the couple are haunted by the presence of 'The Wizard'- a former runaway who returned home to find his parents had moved away. He is never seen, but will often knock on the Moons' door.The ending is one hell of a Mind Screw.

The play has recently become an HSC text at many Australian high schools. It combines elements of absurdism, gothic horror, and fairy tales with the paranoia of post-9/11 suburbia as well as drawing inspiration from real-life headlines about missing children.

Has nothing to do with the magical guardian from Cardcaptor Sakura.