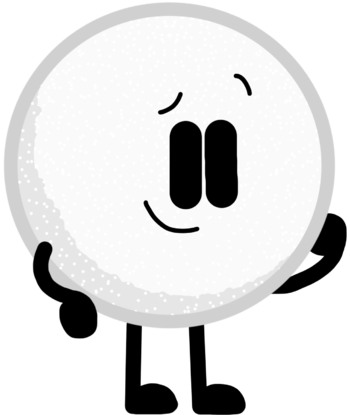 (formerly known as ThatCube1991, xX-SugarTheCube-Xx, Ball-of-Sugar, and SugarCreatorOfSFDI) is an artist on DeviantArt and a member of the object show community. Hitting the scene in July of 2013, the first thing he drew that was related to object shows was this drawing

of his now weird ship Matchbrush (Match x Paintbrush). He then followed by introducing his first OC, Cube (who, as of February 17th, 2017, is now a ball of sugar

Connor used to be immature and draw a lot of Crack Pairing art, including Matchbrush and Marshatin, before he started acting more maturely around 2017.

He usually draws object show art, but he also does sci-fi creatures as well. However, he isn't very open at Bloodier and Gorier object shows, such as ShallotHare's Object Terror. He also deems his pre-2017 content as an Old Shame and shudders when someone brings it up. His main OC group is the "Sugar Bunch", which all of the members can be listed below. Once a month, he opens requests for 20 (previously 10) users lucky enough to see the request journal in time, but outside of that he also does point commissions for other users which he will accept at any time.

While you can request him to draw you some art, it has to be related to Object Shows, safe for work, and cannot be too complex. He also treats certain games, such as Fortnite, Among Us, and Friday Night Funkin', as fast food and has a negative opinion on these games (which can be explained by the toxic side of the communities), so best not ask for Crossover content regarding these either.