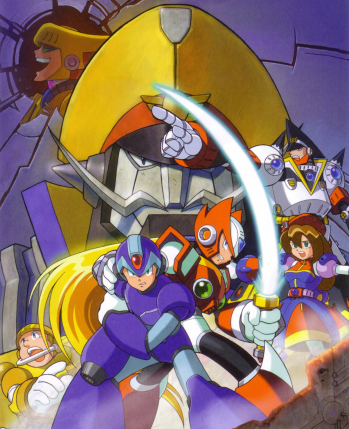 "Mavericks emerged at the point 5567! They've occupied the Sky Lagoon! This appears to be the Repliforce's doing!"
— Hunter HQ, Mega Man X4.
Advertisement:

Mega Man X4 is the fourth entry in the Mega Man X series, released on the Sega Saturn and PlayStation on August 1997 in Japan, September 1997 in North America, and October 1997 in Europe.

In the year 21XX, years following the Doppler rebellion, a global Reploid military called "Repliforce" is formed to help combat the constant Maverick uprisings. However, they consistently fail to protect humans, causing humanity to distrust them and their military might. This controversy creates tension between Zero and his sweetheart Iris, who is the sister of Colonel, an influential leader in Repliforce.

One day, the aerial city Sky Lagoon is sabotaged by Mavericks, causing it to crash to the ground; with Repliforce suspiciously in the area, the Maverick Hunters request Colonel disarm his men and come in for questioning. However, Colonel refuses out of pride and contempt for human government. This incident is the last straw, and the head of Repliforce, a giant Reploid named General, launches a coup d'état to start a nation only for Reploids in space. This immediately causes the entirety of Repliforce to be labeled as Mavericks by the human government, forcing the Maverick Hunters to turn against them and obstruct their migration.

As the first Mega Man X game not to be released on the Super Nintendo Entertainment System, X4 marks a major turning point in the X subseries. First and foremost, series Deuteragonist Zero is made a fully playable character with his own playstyle; instead of essentially playing the same as X as in X3, his playstyle focuses on his Z-Saber. Much like X, Zero gains different sword moves from defeating each Maverick and can use these moves as weaknesses against other Mavericks; unlike X, he uses these with button combinations instead of switching to specific weapons and using them in place of his sword. In addition to Zero's unique playstyle, X4 marks a much Darker and Edgier turn from the previous SNES games, as the story deconstructs what it means to be a sentient robot when such technology is unfamiliar to society. These themes of the relationship between robot and man would be explored in later games in the X series, and eventually in the Zero series.